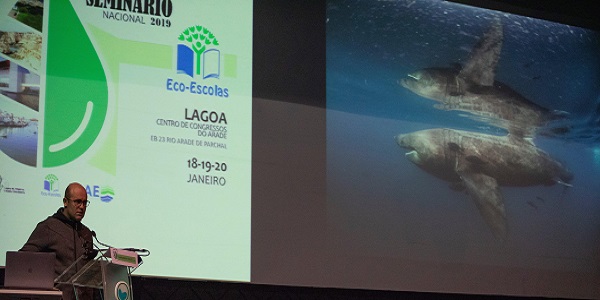 “Passing from the awareness stage to the mobilisation for sustainable education stage” was one of the commitments made by teachers, town hall presidents, experts and young people who participated in the national seminar Eco-schools, held in Lagoa, from the 18th to the 20th January 2019.

The Algarve received, for the first time, this initiative, that, in the previous eleven editions covered some of the main cities of the country, calling for an education for sustainability and pointing the way of co-learning and sharing among professionals of this area.
Lagoa’s Municipality and ABAE – (Europe’s Blue Flag Association) were co-organisers of the edition Eco-Schools 2019 which took place for 3 days in the Centro de Congressos do Arade and at the head of the School Group Rio Arade – Primary School of Rio Arade, Parchal. Note that, in this school year of 2018/19, 1700 Schools from the whole country are participating in this programme, 44 of them are from the Algarve and 7 from Lagoa’s municipality.
All institutions from the School group Pe. António Martins de Oliveira, in Lagoa, from kindergarten to Secondary, are registered, for the second consecutive year, in the School Programme, involving 2136 students, along with Nobel International School of the Algarve. This private school was distinguished, in this seminar, with the Award for Excellence by the work developed and it is among the 17 Excellency Certificates which will be given this year, in Portugal.
The Town Councillors, Ana Martins, responsible for Education and Anabela Simão responsible for the Environment represented Lagoa’s Municipality in the opening and closing of this Lagoa’s national Meeting, where also participated several local, regional and national parties, namely the national operator Margarida Gomes.
The «Eco-Showcase» with more than 40 national entities and 16 local entities from the Municipality of Lagoa, which used to participate in the monthly market «Lagoa-Bio», was one of the distinctive notes which added to the thematic panels, workshops and work forums, some of the most genuine and original products of the region.
Lagoa, Educator City, that has been investing, in the past years, in several Environmental Education projects, bet in the organisation of this meeting as appreciation for the work done but also to improve its potential and its sustainability practices. In addition, this was an opportunity to inform young people, teachers and experts from the whole country about the environmental diversity of Lagoa.